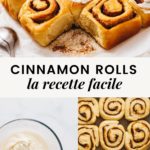 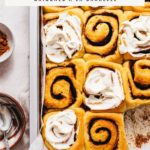 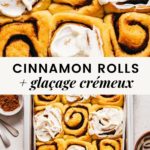 A comforting recipe from the USA: Cinnamon Rolls and their icing! Soft buns with a cinnamon filling, topped with their creamy frosting. A real delight for breakfast, afternoon tea or brunch ...

Simple to make, the cinnamon rolls will perfume your whole kitchen with their delicious scent of spices… I garnish them with creamy frosting made from fresh cheese, like the original recipe. But if you prefer to eat them plain, rest assured it's just as delicious.

Some details about this cinnamon rolls recipe

Flavor : with each bite, we savor the cinnamon, a real treat! With the icing with the good taste of vanilla and cream cheese, it is a delight ...

Texture : they are very soft! You can check it yourself right out of the oven ... The icing brings a small dose of creaminess that goes wonderfully with cinnamon rolls.

Difficulty level : this is a classic brioche dough, so if you've already made brioches, it's very easy. For those who have never made a brioche, go for it, you will not be disappointed! I explain everything in detail in my recipe.

On the brioche side, we find the basic ingredients (note that I do not use no refined sugar, but honey): flour, milk, baker's yeast, egg, butter, honey, vanilla, salt.

Inside the cinnamon rolls, what we see in my photos, with a brown color, is the cinnamon filling. To make it, you will simply need cinnamon, butter, whole sugar, vanilla.

For fresh cheese, I really recommend the Philadelphia: this cheese is not very salty unlike other brands, so perfect for desserts.

How to make cinnamon rolls at home?

We start with the brioche dough, because it requires two growing times (like all brioches in general). I make this cinnamon rolls recipe with my pastry robot, it can also be done by hand but it is longer and requires more effort.

To dough, I mix the wet ingredients (melted butter, milk with yeast, honey). Then I incorporate the flour and salt little by little. Then I add the egg and knead with the hook for several minutes until the dough is elastic and detaches from the bowlThen, it is the stage of the first growth in a warm place for 1 hour: it should double in volume.

During this time, we prepare the cinnamon filling : just mix all the ingredients. When the dough is ready, spread it out on the work surface by creating a large rectangle and then cover it with filling before rolling it. We then cut 12 pieces that we place in a large dish.

It's time for the second shoot, in a warm place for about 30 minutes, so that the cinnamon rolls are touching. After, we put in the oven, and we appreciate the good smell of cinnamon coming out of the oven ... For the icing, just whisk the ingredients, then cover the buns after cooking.

My tips for successful brioches

Put your ingredients at room temperature 1 hour before starting the recipe, to ensure cinnamon rolls with a good moist texture.

To make sure the dough rises well (first and second push), I place it in an oven at 30 ° without circulating heat. A tip that will save you time if necessary ...

To cut the rolls, use a wide knife which cuts very well, ceramic knife type. This will prevent you from crushing your rolls by cutting them, it would be a shame ...

How to store your cinnamon rolls?

These cinnamon rolls are better to enjoy on D-Day: very soft, delicious! On the other hand, if you need to keep them longer, place them in an airtight container.

At room temperature, they can be kept for about 2 days. In the refrigerator, they will keep for about 4 days.

Other recipes to try

If you like homemade buns, I advise you to take a look at these other recipes from the blog:

If you make this recipe, don't hesitate to tag @liliebakery on Instagram so I can see your beautiful cinnamon rolls! 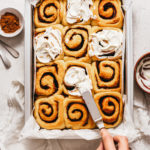 The brioches are always better on D-Day, softer. You can store them at room temperature for 2 days in a well-sealed container or place them in the refrigerator for about 4 days.
By Lilie bakery
Did you make this recipe?Tag @liliebakery on Instagram so I can see the result :) 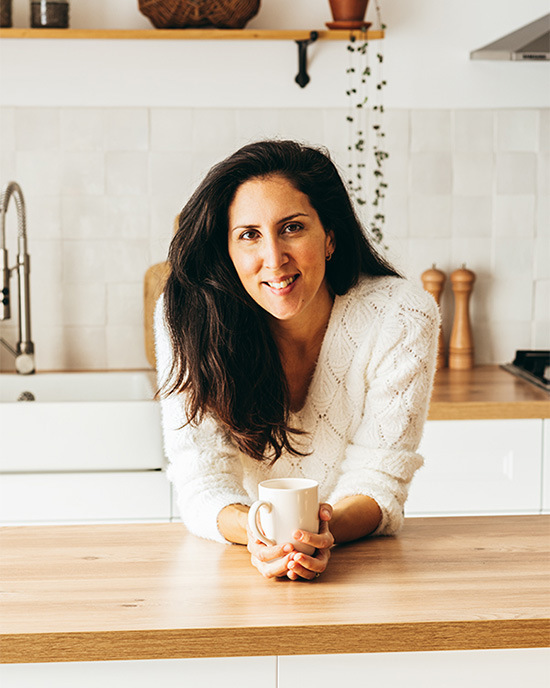